Even the best laid plans can be ruined by a single storm.

Seeding had been going fairly well for us and for the area. After a solid 8 days of seeding, we had planted about 50% of the crop. A rain shut us down at that point, which was actually quite welcome. A nice, slow rainfall that gave us 3-7 tenths of an inch was just about perfect for germinating our freshly seeded crops, and even gave us a nice little break to catch up on sleep.

Last week we got going again, seeding another 20% of the crop. We knew another rain event was a high probability, so we went as hard as we could, but showers and surprisingly wet soil slowed our progress. We had a goal of getting our durum and soybeans all finished before the next rain… but we didn’t quite make it.

On Saturday, we had two drills going in different locations, as usual. Our SeedMaster was planting soybeans over east, and our John Deere was sowing durum out west. A freak thunderstorm popped up right on the edge of our soybean field and basically stopped there. Sitting in the truck, I could see a yard only 4 miles away that was basking in sunlight as rain poured down on our field. Talk about frustrating! The cloud sat there, dumping rain on us for what seemed like an eternity before finally moving on. So, then comes the question; clean out the drill, switch crops and move, or wait for the ground to dry?

Opting for the latter, we parked that outfit and continued on with the other drill out west, which interestingly saw no rain at all. The showers continued off and on throughout the rest of the day, eventually hitting just about every field. The JD finished its field that night and came home. We had plans of moving it east, but the morning brought more showers, which not only complicated seeding but also stalled spraying. After an annoying amount of rain and a 10 minute futile seeding attempt with the SeedMaster, we finally had to give up and go home. Later in the day, we did do some spraying, but the drills accomplished nothing.

Yesterday we had more difficult decisions to make. Rain was forecast for the afternoon, so why move and switch crops if we would only seed for a couple of hours?

But, we are farmers after all. So we switched the SeedMaster from soybeans to canola and moved 20 miles to another field. We managed to seed about 1 round around the field before this monster reared its ugly head: 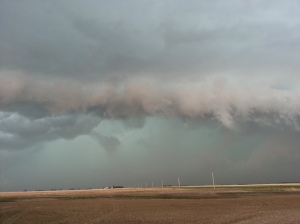 Storms like this are many things at the same time: beautiful, fascinating, dangerous, and expensive. Tearing my eyes away from the extraordinary magnificence of the power and wonder of nature was difficult, just as was quelling the apprehension and fear burning in my gut at the knowledge of what was to come. The storm approached slowly from the west, veering north so much it almost seemed as though it would miss us entirely.

Then the wind died. The temperature dropped like a stone. A shiver ran up my spine that was not entirely due to the cold. As the wind picked up again, we quickly moved everything we could into shelter, and ran for cover. A wall of rain slammed into the building we were in like a locomotive, a pounding roar so loud it sounded like the world was ending. Sheets of rain blew across the ground like a hurricane had landed upon us. Thunder roared through the sky, and flashes of lightning lit up the darkness like searchlights. Nature’s fury had been unleashed, rather unexpectedly.

At the end, rain reports were all over the place. In Fillmore, where I was at the time, 1.5 inches had fallen, while at home, only half an inch had been deposited. North of us, where friends of ours farm (Osage), 2.25 inches was recorded, while a neighbor between us and Weyburn found 4 inches(!) of precipitation. Hail formed little snowbanks around Creelman (southeast of Fillmore) and ditches ran like rivers. The rain caused a run-off event greater than the snowmelt had, with water tearing trenches through fields like little canyons.

One day. One hour. One storm. That’s all it took to wreak serious havoc on our seeding plans and even cause damage to what had already been seeded. One storm may have changed the course of the entire year; perhaps even the course of our farm’s future. That is how difficult farming can be; everything can change in a split second by something totally out of your control. Now we have many questions to answer: when will we seed again? Will we be able to finish seeding? How much damage has been done to our crops?

None of those questions will be answered for a few days. For now, we will watch the skies and pray for sun, wind and dry weather. More rain in the next few days could put the proverbial nail in the coffin… And more rain is forecast for Thursday. Once again, for the fifth time in as many years, the question lurks in my mind: will we finish seeding this year? Time will tell.

I am a farmer from near Weyburn, Saskatchewan, Canada. We grow durum, wheat, canola, peas, lentils, and flax. I farm with my family, including my wife and three young sons, along with several other family members. We are a 3rd-generation farm that strives to continually improve - to leave things better than we found them. I'm involved in various places in the agriculture industry as well to try and build a better future. As a farmer and an agronomist, agriculture, and the science and business therein, is my fascination and my passion. View all posts by Jake